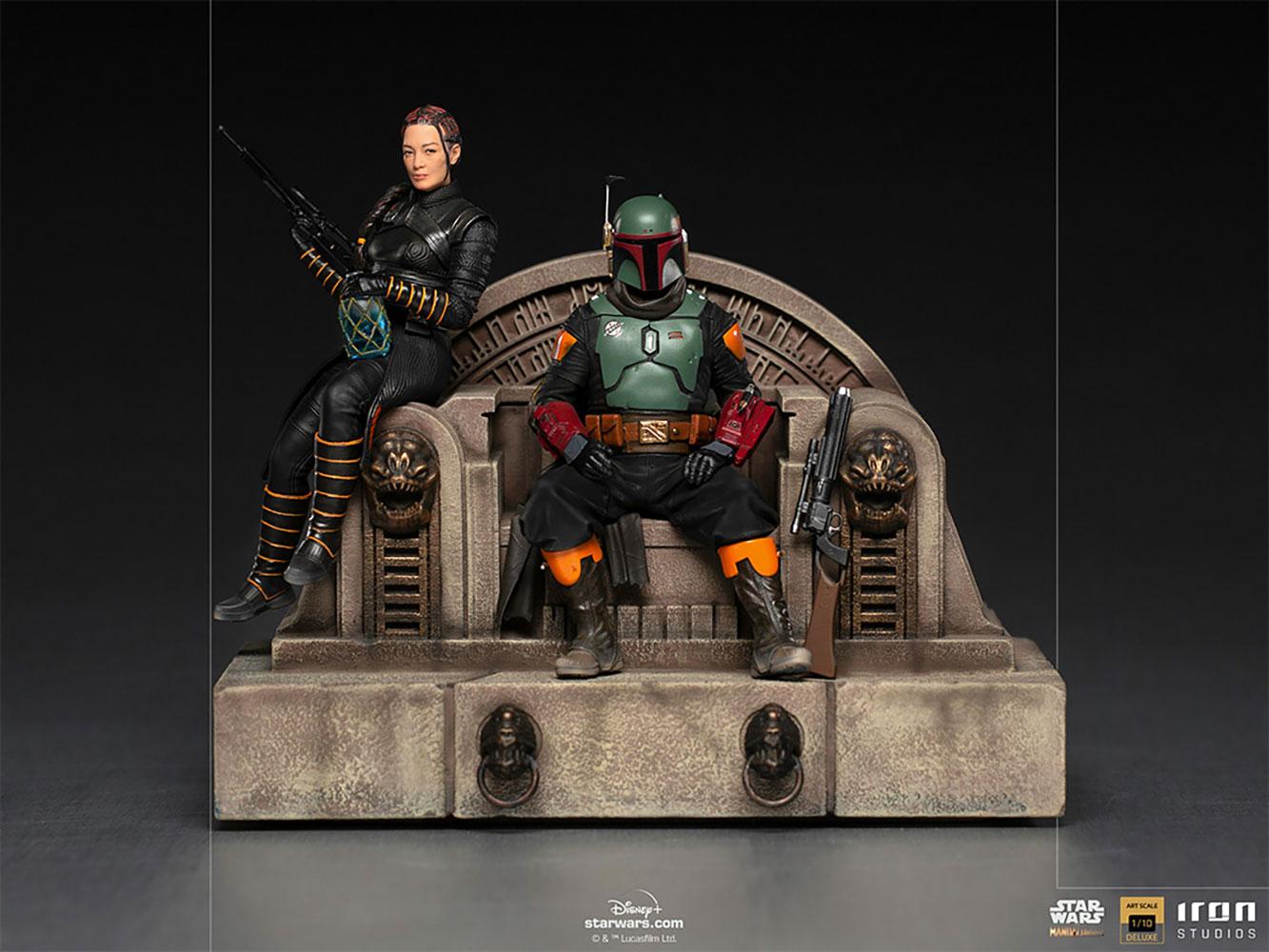 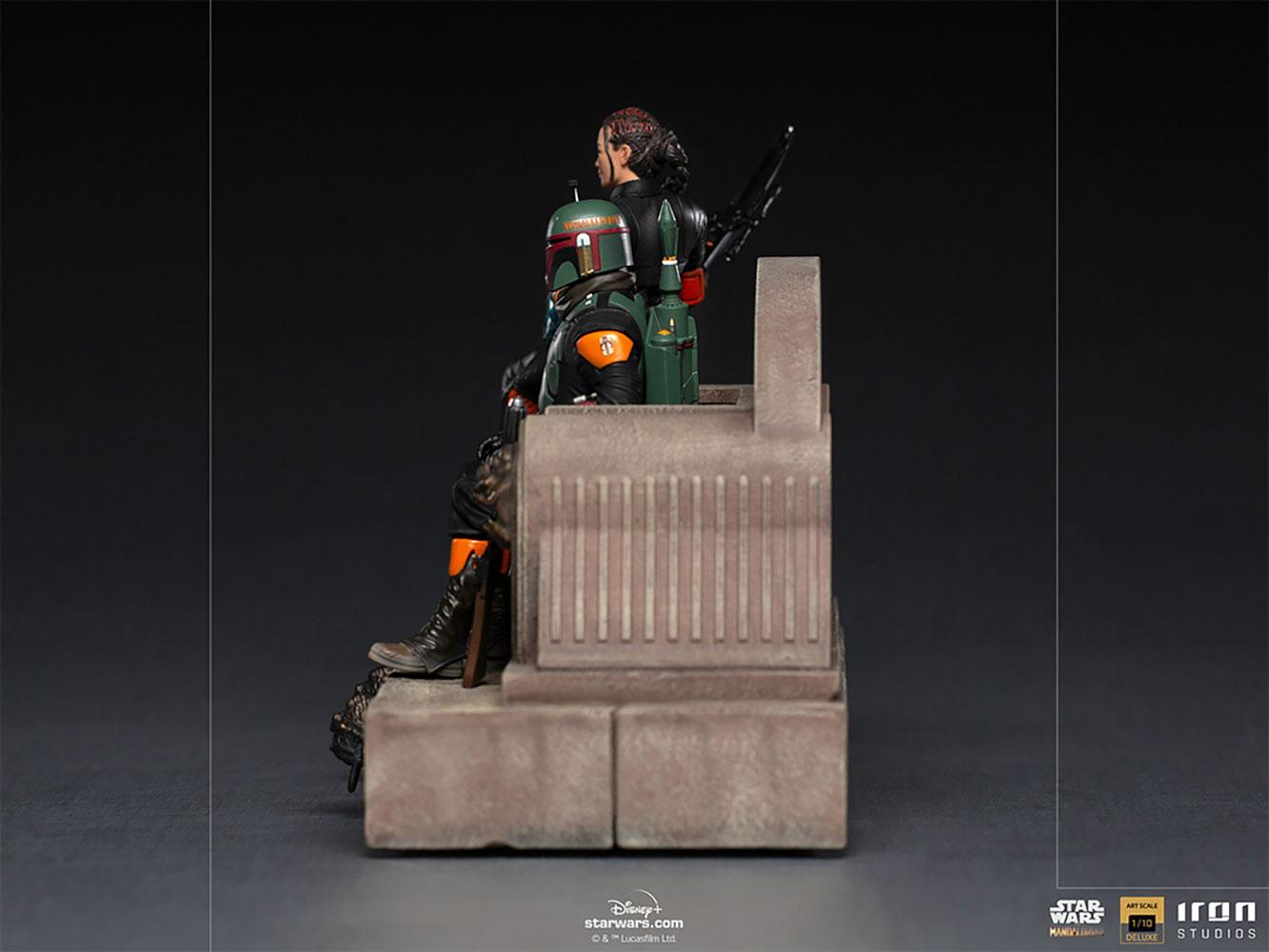 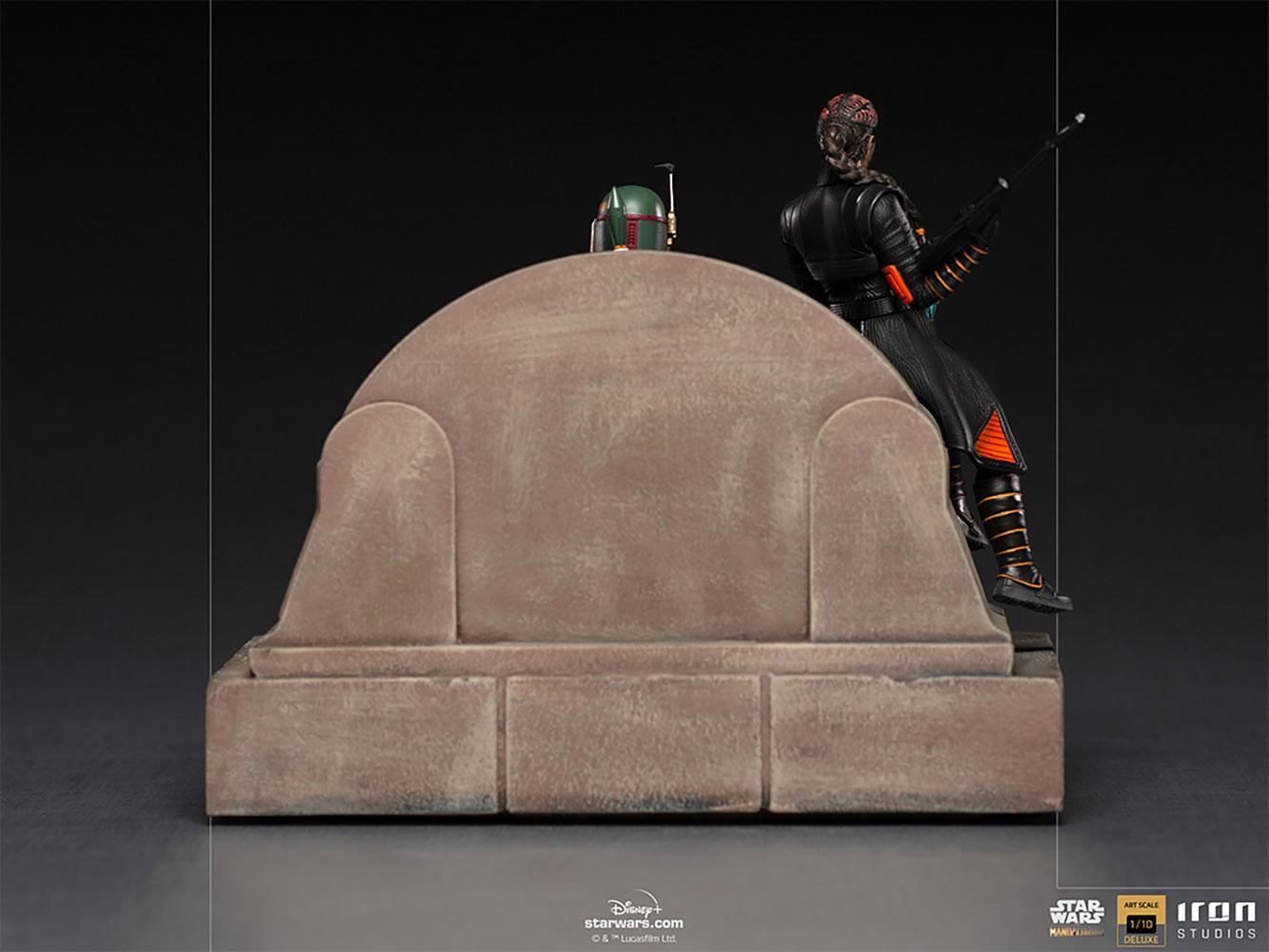 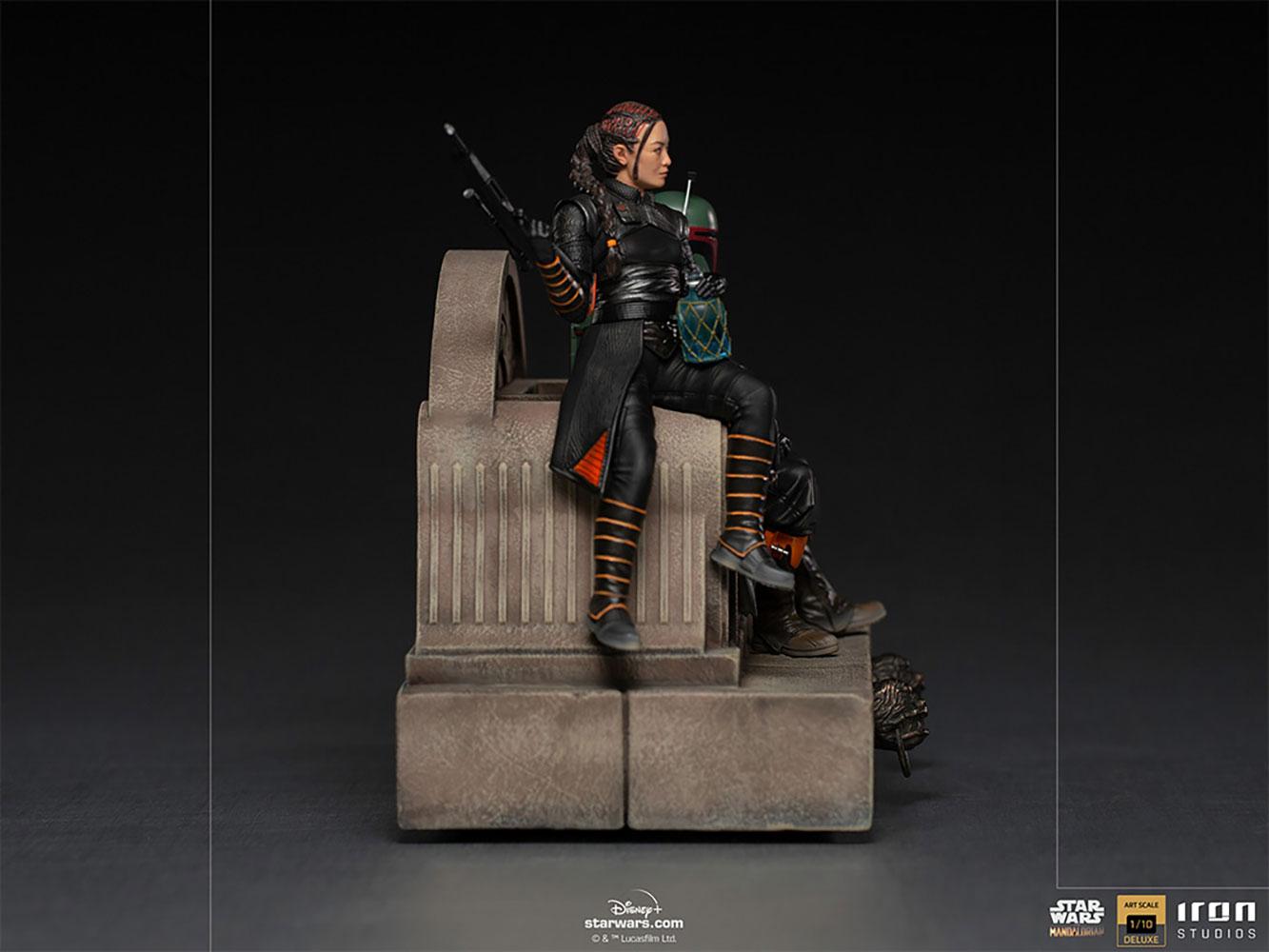 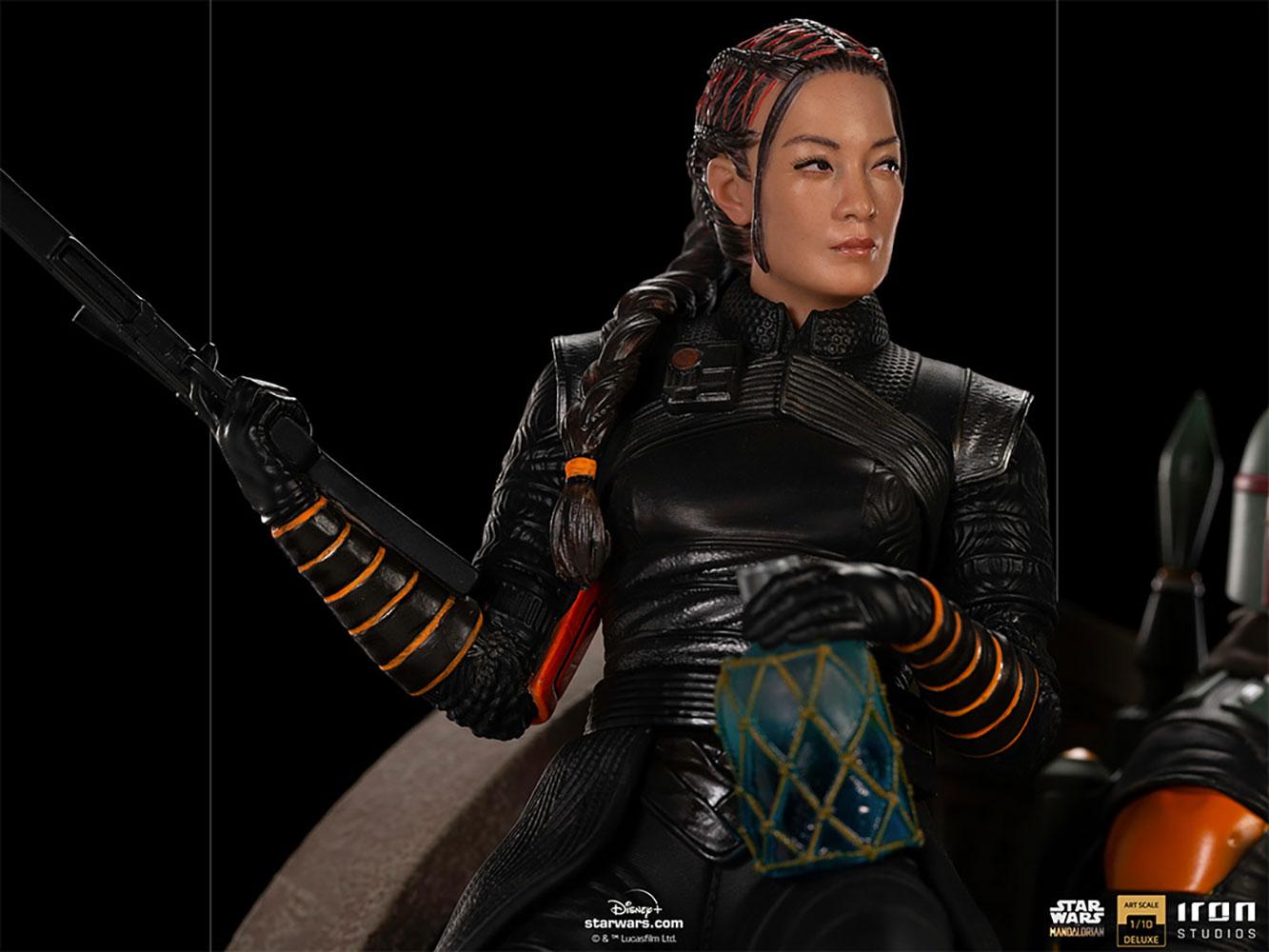 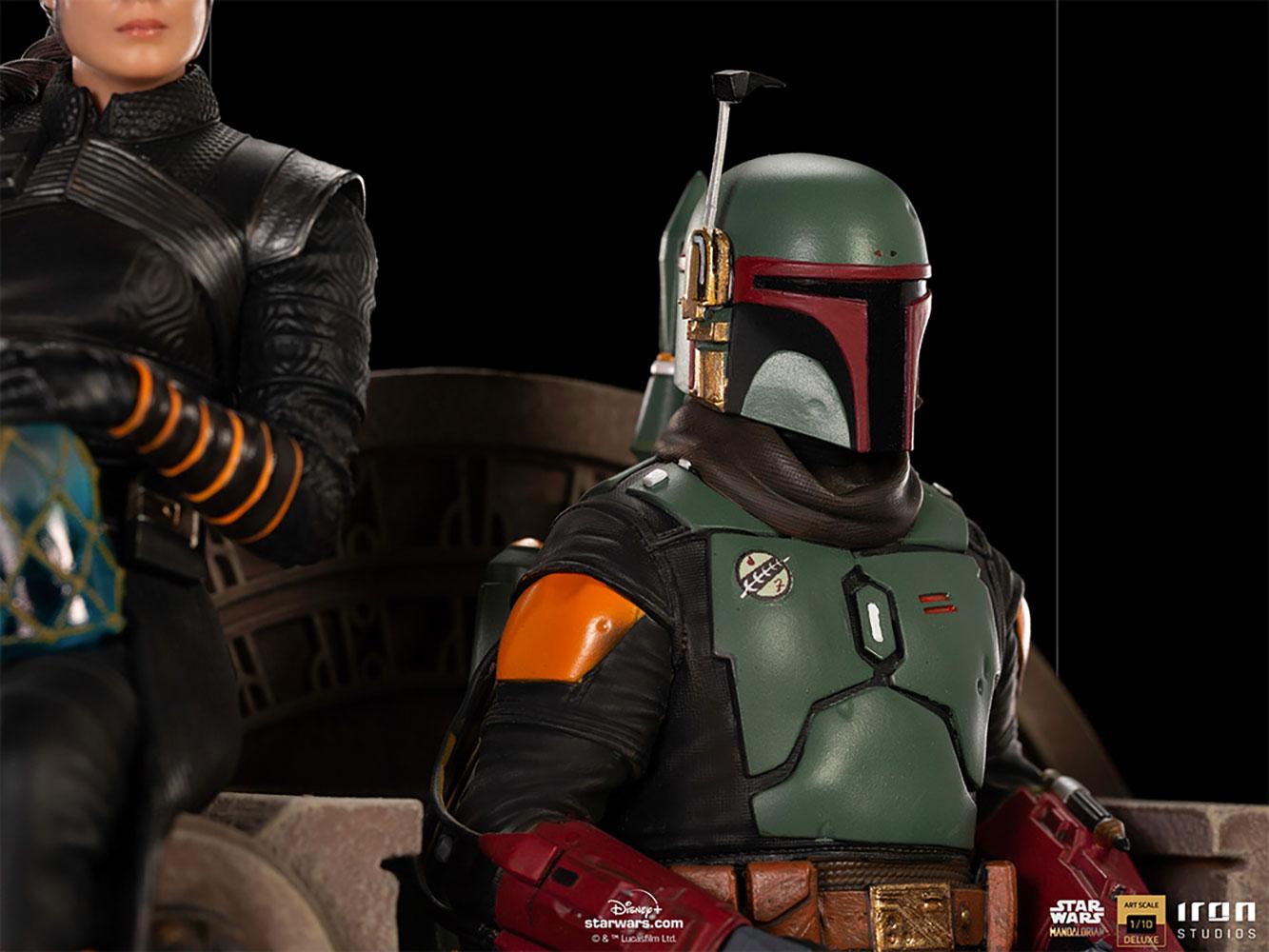 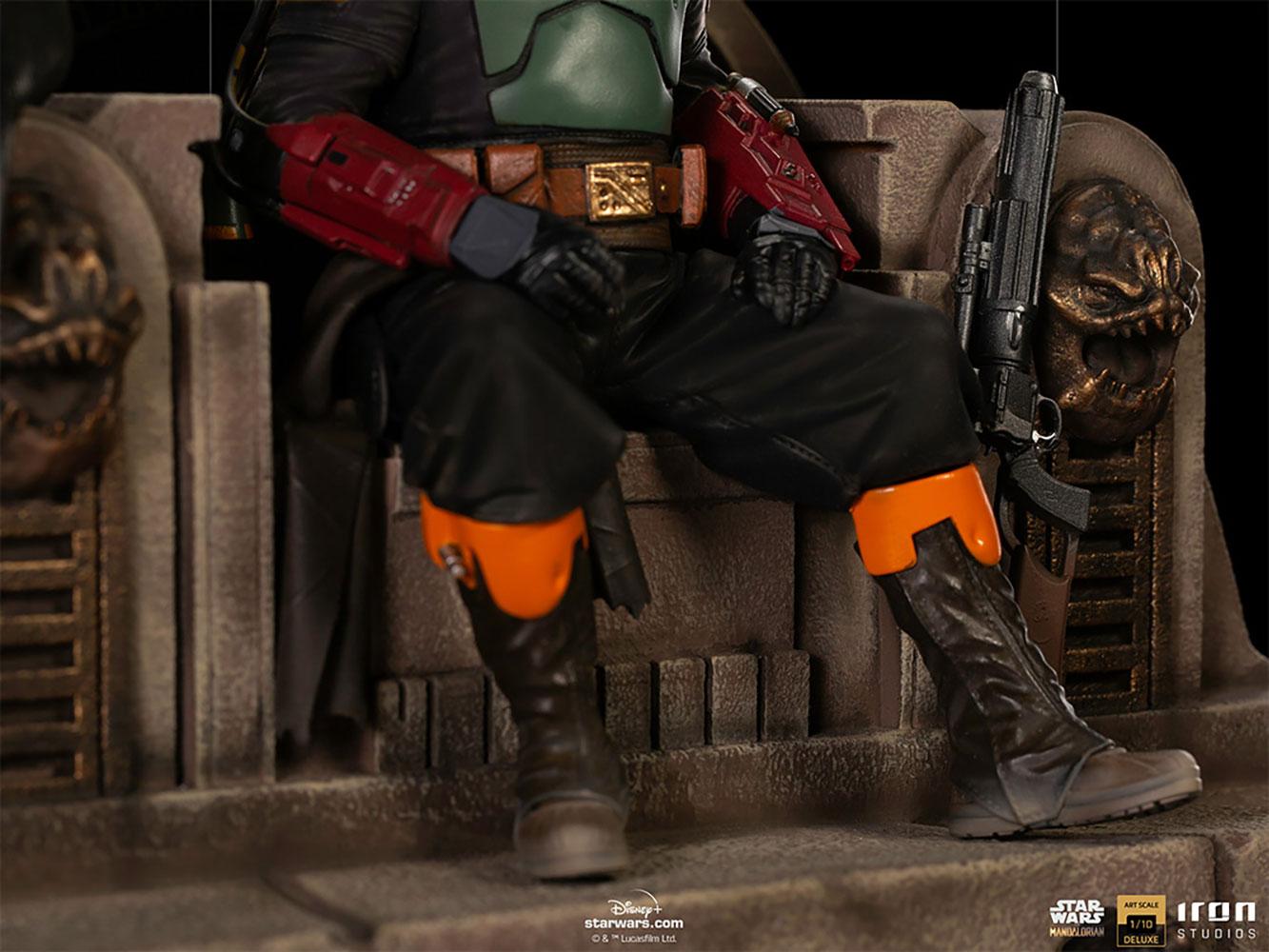 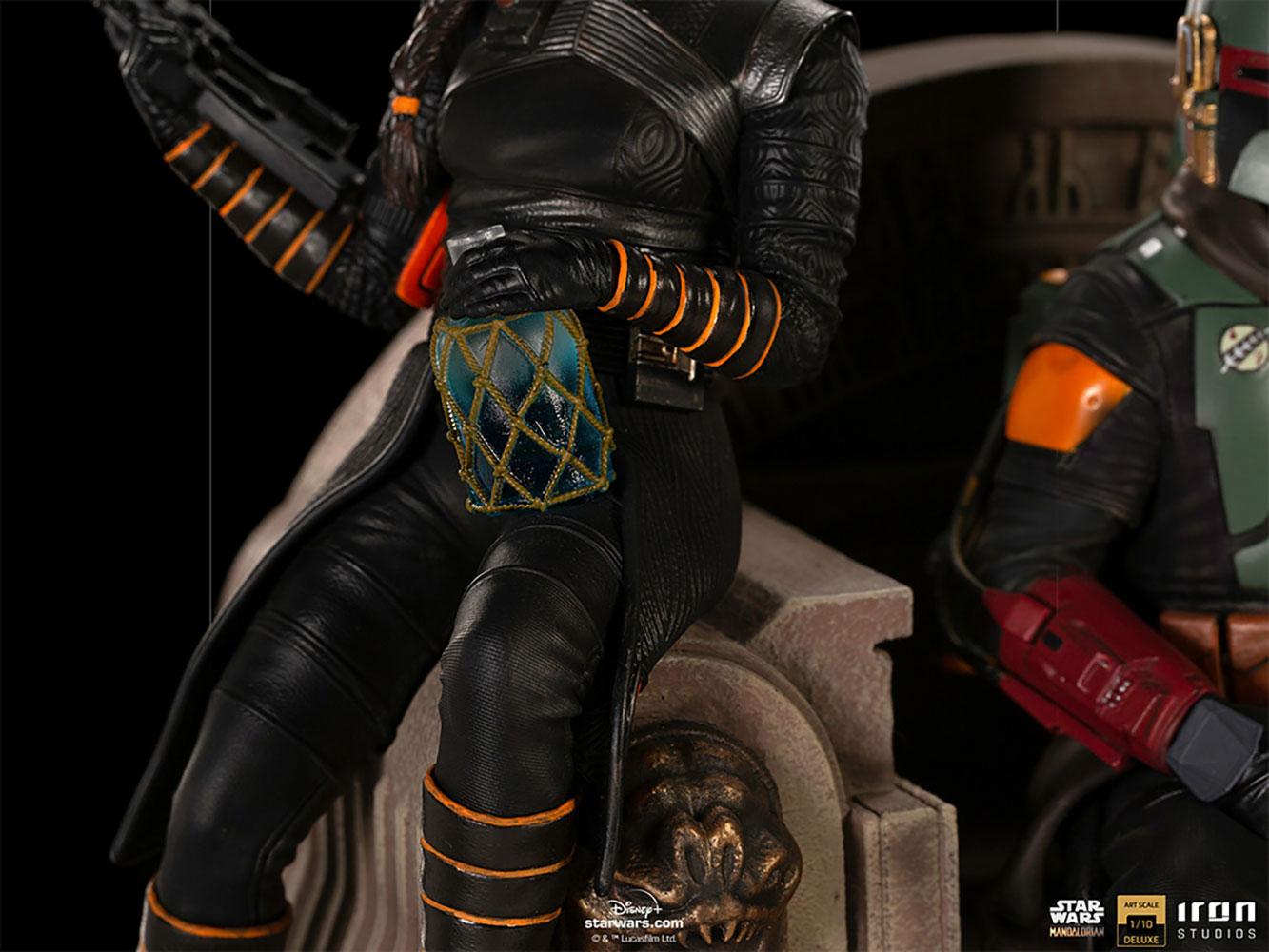 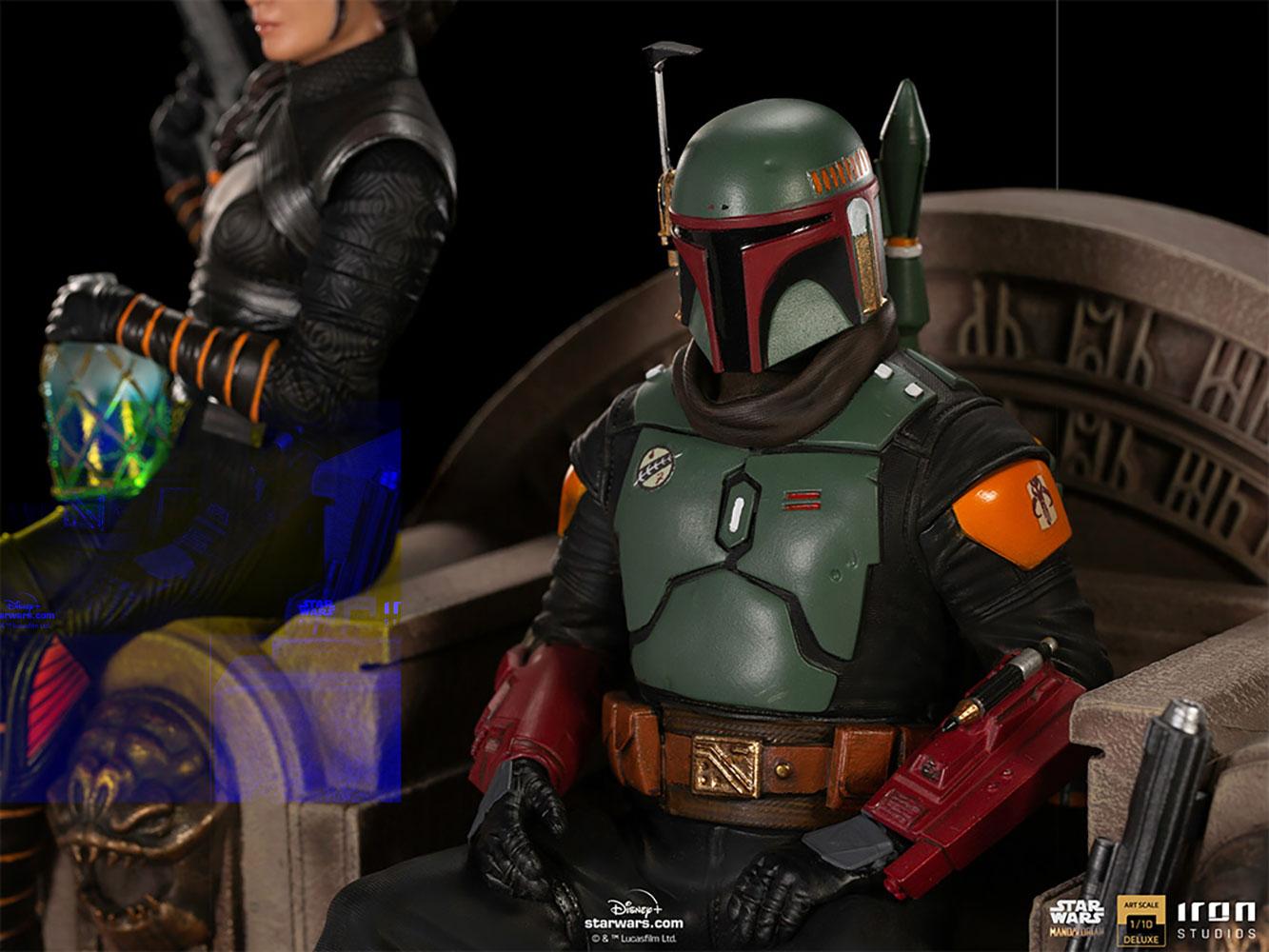 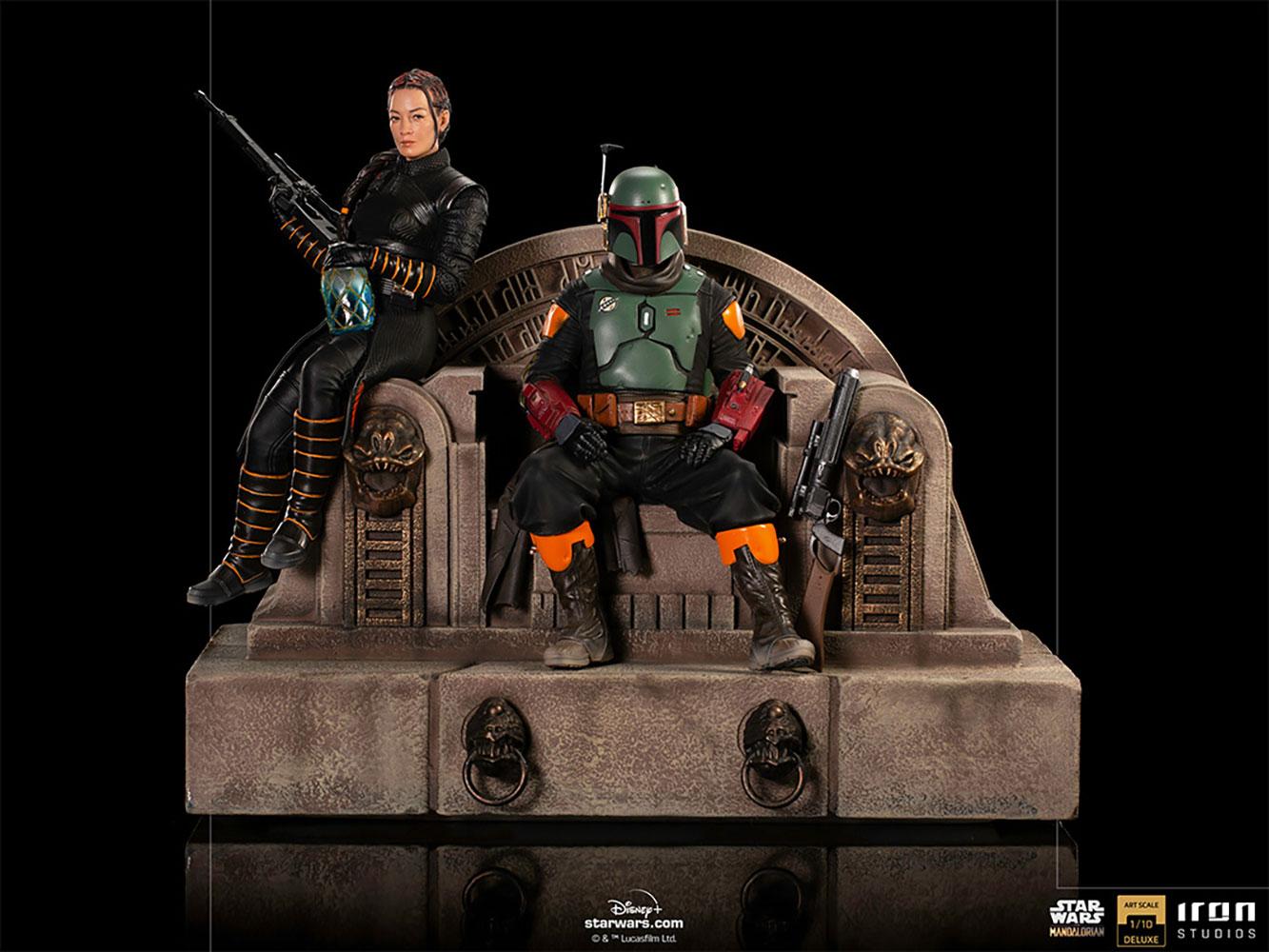 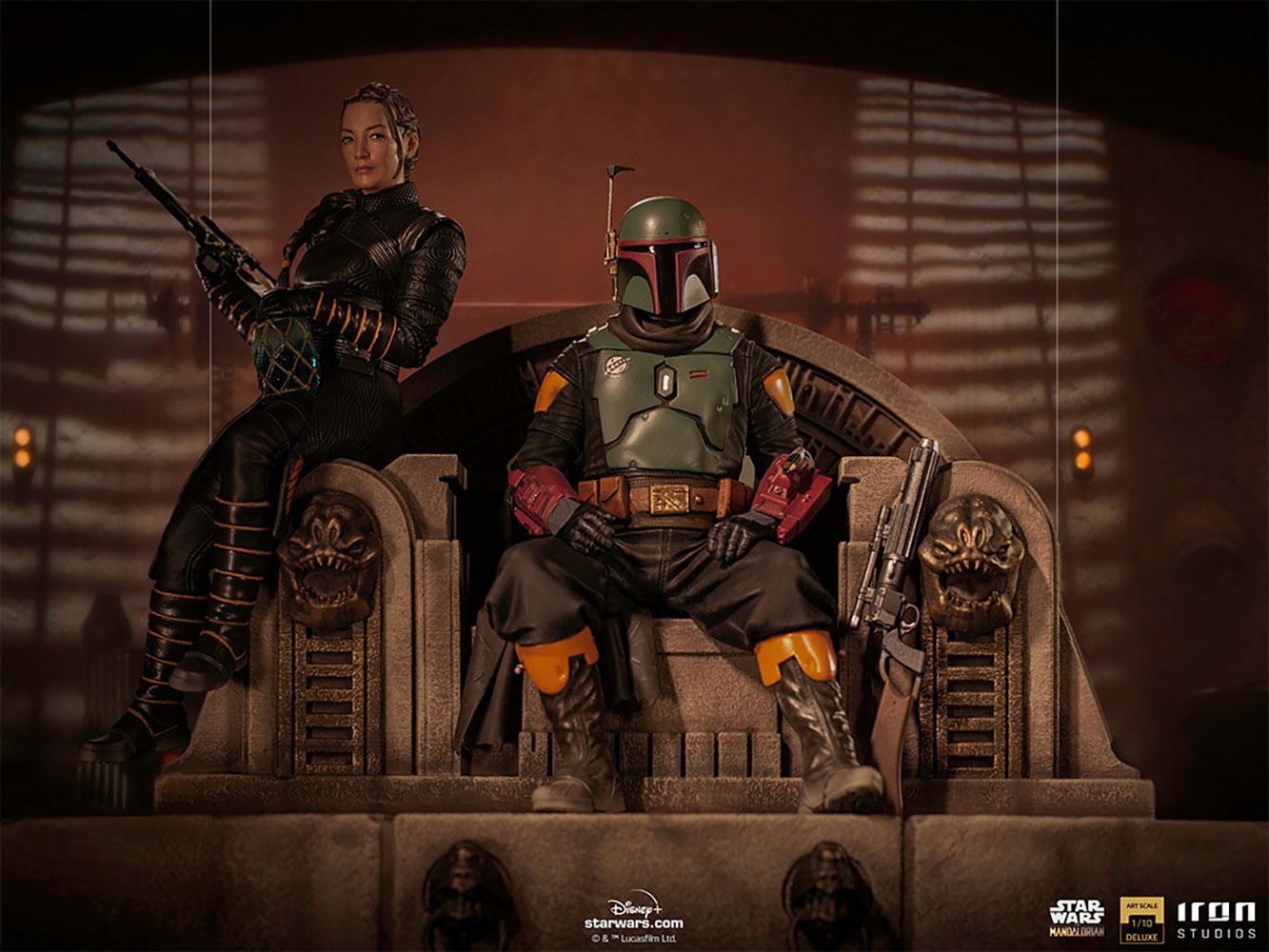 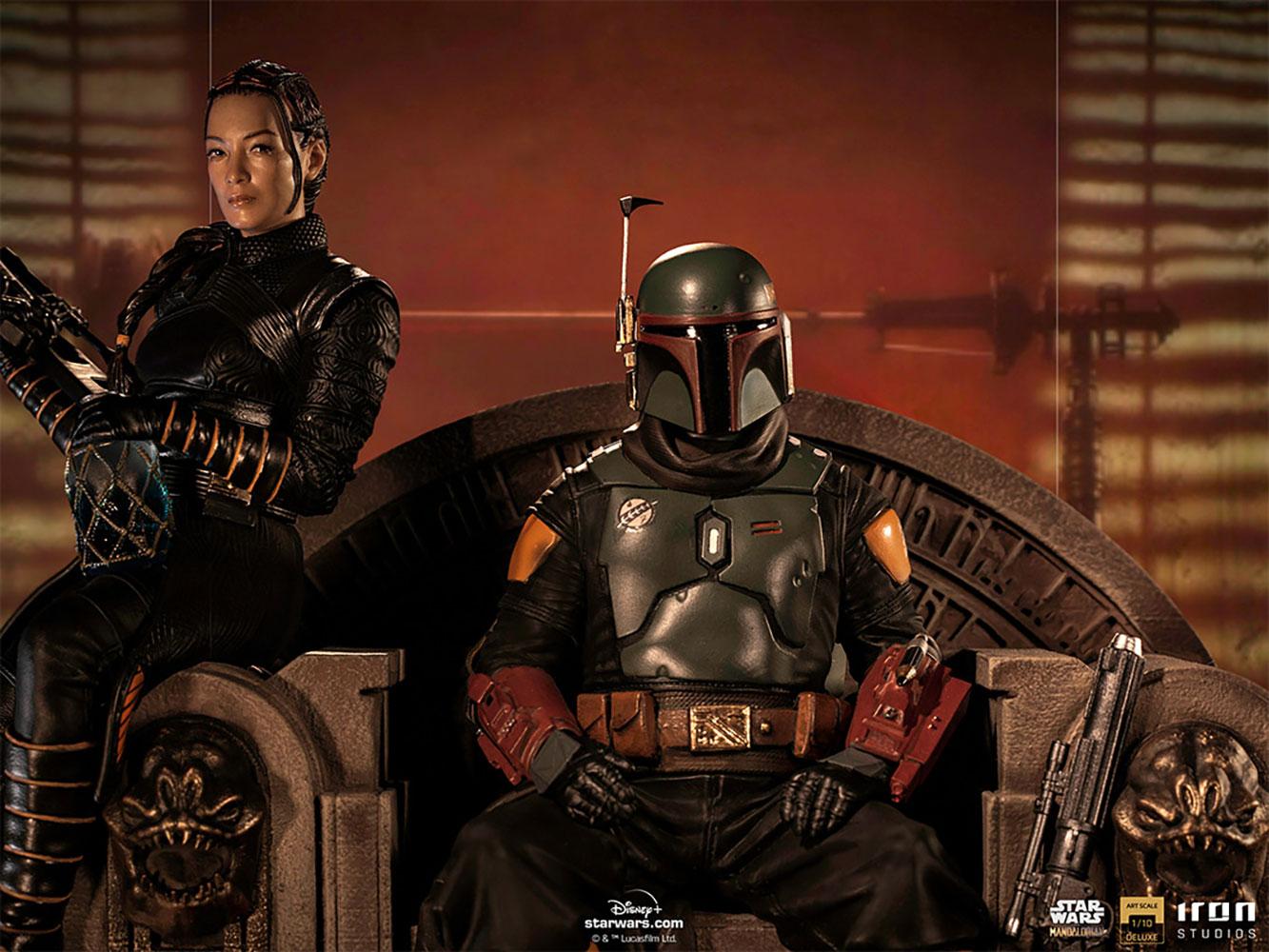 In the past, he was one of the galaxy's most feared bounty hunters, working for both the underworld and the Empire, becoming a legend in the process. After a long time, when many thought he ended by confronting Luke Skywalker and falling into the dreaded Sarlacc on Tatooine, he resurfaced in "The Mandalorian" series. recover his armor and take from Bib Fortuna the throne that once belonged to the late Jabba. With Fennec Shand at his side, he has become the new big boss of gangsters in the galaxy.
The bounty hunter sits on a throne adorned with monstrous bronze heads, which meticulously reproduces the minimum details of the post-credits scene of season 2 of the series "The Mandalorian". Thus Iron Studios presents its statue "Boba Fett on Throne Deluxe Art Scale 1/10 - The Mandalorian - Iron Studios". This statue features the iconic Star Wars mercenary in his restored Mandalorian armor, with his classic blaster rifle resting on the left arm of the concrete throne. The scene is a preview of "The Book of Boba Fett," another Star Wars spin-off series slated for late 2021.
During the Republic era, another legendary bounty hunter named Jango Fett was the genetic donor for the creation of the Clone Troopers, soldiers genetically altered at birth for rapid growth and loyalty, and submission to the military. of the former Galactic Republic. Fett asked to receive for the gift, in addition to a sum of money, a single unchanged clone of himself, which he named Boba Fett and raised as a son. After seeing his father killed in battle by Jedi Master Mace Windu, Boba, unsuccessful in his quest for revenge, was imprisoned on Coruscant. After serving his sentence, he followed the same professional path as his father, working with several other hunters.

Another release from Iron Studios, in its The Mandalorian line, which already features figures of Mando, Moff Gideon, and Bo-Katan. All pre-order.
Iron Studios will also release the variant version - Boba Fett and Fennec Shand on Throne Deluxe Art Scale 1/10 - The Mandalorian - Iron Studios.

- Made of polystone - *(may contain resin, polystone, PVC, metal and fabric parts)