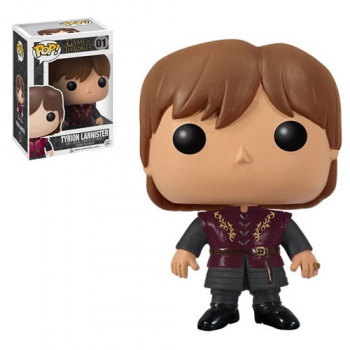 Inspired by designer toys and stylized character collectibles the world over, Funko is back with Pop! bobble heads.
If you've ever wanted a Pop! Vinyl figure from HBO's hit television show Game of Thrones, then now's your chance! This excellent Game of Thrones Tyrion Lannister Pop! Vinyl Figure features the Imp of Casterly Rock as a stylized 3 3/4-inch tall Pop! Vinyl figure in a lavish doublet that is in Lannister colors - crimson and inlaid with gold.