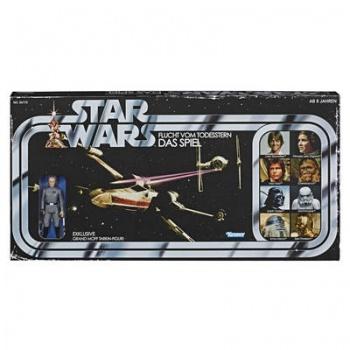 This retro edition of the Escape from Death Star board game invites fans to remember. The game is based on the original board game released by Kenner in 1977 and includes an action figure from the exclusive retro Grand Moff Tarkin collection. Fans can piece together original Star Wars moments and help their favorite characters escape the Death Star trash compactor and make their way to the Rebel base. Players assist Luke Skywalker, Princess Leia, Han Solo, and Chewbacca in their escape. The hub determines the actions of the players, but it is up to them to decide which route to take. Do they go for shortcuts where they can reach power? The player who makes their way through the TIE fighters first and reaches the Rebel base first wins. Copyright and TM Lucasfilm Ltd. Hasbro Gaming and all related terms are trademarks of Hasbro.